The President, the Headmaster and the Bells 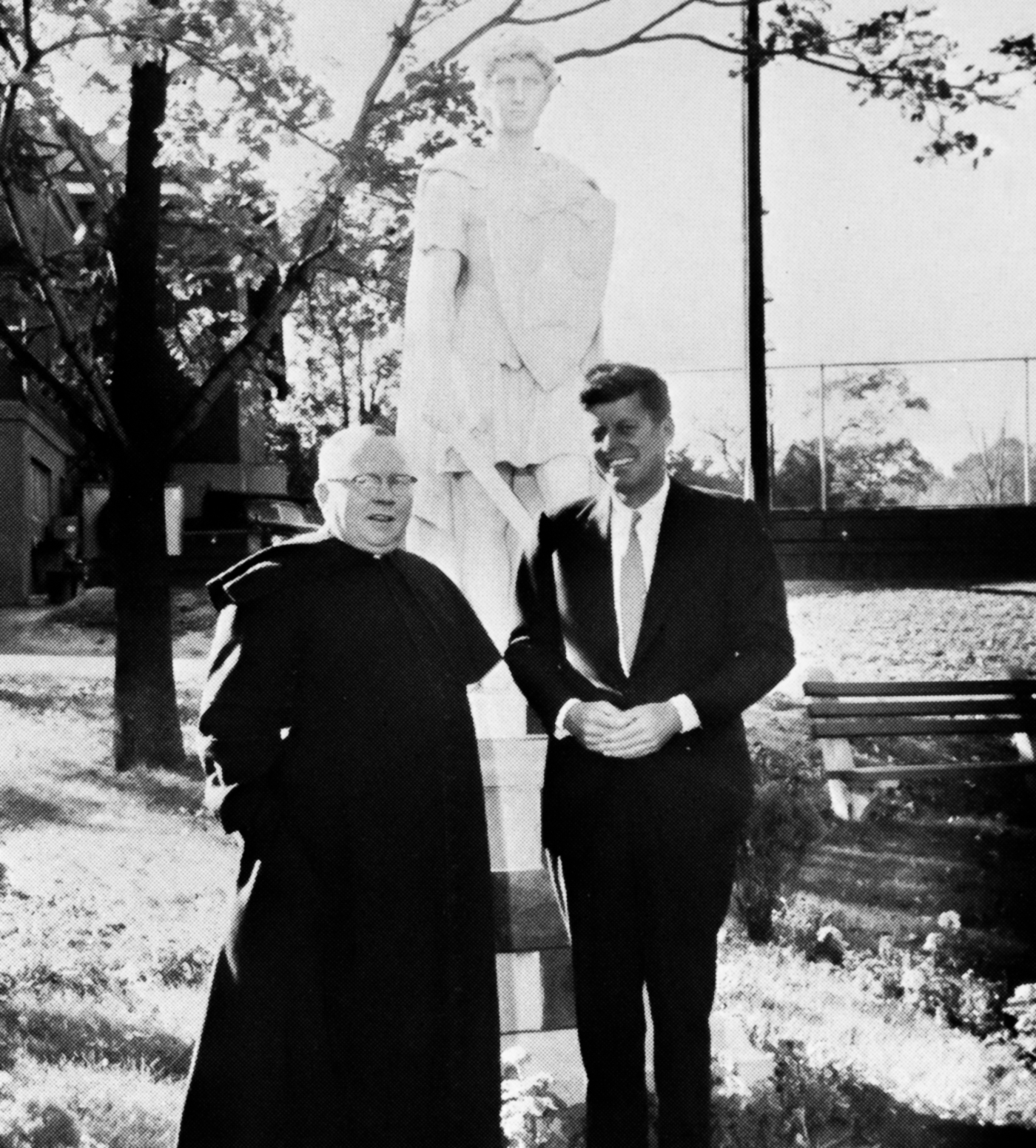 Those of us who spent many golden hours of our youth in that cozy stucco building high atop the steep incline of Nonantum Hill will recall that the end of a period of instruction would be marked by the ringing of a bell at an hour which coincided with the time shown on a large round clock located prominently on the wall at the front of the classroom. My recollection is that each class was fifty (50) minutes in length, during which time the thin black second hand of the clock would sweep continuously around the clock’s white face, pushing the minute hand forward in small imperceptible flickers. At the moment the minute hand told us it was ten minutes before the hour, a series of bells with rounded metal covers, strategically located high in the corridors of passage, and electronically wired to coincide with the clocks on the classroom walls, would “ring” for approximately five (5) seconds. The “ring” was not particularly melodious, nor designed to be such, but it could be called a bell, and it served its purpose. The class was ended, and it was time for us to either move to a different classroom for a different subject, or just relax a bit as one teacher departed to another classroom, and we awaited the arrival of another teacher who would try to bring order to the noisy chatter, and then try to hold our attention for the next fifty minutes. It was a pattern which repeated itself smoothly and regularly, hour after hour, day after day, week upon week, year after year, almost without notice; except once.

The headmaster of the school in November of 1960 was the Rt. Rev. Monsignor Charles R. Flanigan. Almost every teacher had a nickname which was passed down from year to year by the students. The monsignor was referred to by the students as “Charlie” or “The Mons.” For those who attended the school during his tenure as teacher, and then as headmaster, he needs no introduction. For those who did not know him, he is not an easy subject to describe or explain. For purposes of this little story, I would focus only on some basics. He was, of course, Irish, and Catholic, and a priest, and a son of South Boston. He was devoted to St. Sebastian’s, and like the captain of an old sailing ship, ruled over the affairs of the school and the students from his office and living suite on the second floor, with something akin to the (not always) metaphorical “iron hand.” He was not reserved, or cool or smooth. He was a dedicated supporter and follower of the St. Sebastian’s athletic teams, and was usually present for all home varsity football and hockey games. In 1957, he authorized the construction of the Robert N. Daley Memorial Rink which would prove instrumental in the great success enjoyed by the hockey team in the following years.

He dined with the students every day, and throughout the noon meal, his white socks visible between his black shoes and his black cassock festooned with a long row of bright red buttons, he sat at the “head table” with other members of the faculty, keeping his eyes focused on the students in front of him, in search of some misdeeds at table.

The photograph which accompanies this narrative was published in the 1961 edition of “The Arrow.” Then Senator (and Presidential candidate) John F. Kennedy was on Nonantum Hill in November of 1959, where he posed for a photo with a proud and delighted Msgr. Flanigan in front of the familiar statue of Sebastian, the young centurion and martyr of courageous faith. The visit may have been arranged by Richard Cardinal Cushing, who as most will recall was a close personal friend of the Kennedy family. The particular location for the photo in front of our patron saint would have been selected with understandable pride by Msgr. Flanigan. The end boards and wire screen of the Daley Rink are visible behind the Headmaster, the martyred saint, and the youthful Irish Catholic candidate.

John Kennedy’s Catholic religion had been a difficult issue for him in certain parts of the country, both in the primaries and in the general election. Msgr. Flanigan was old enough to remember the discrimination which Irish Catholics once experienced even in his home state and the City of Boston. This same prejudice had helped to defeat Governor Alfred E. Smith in 1928, and there was ample basis for concern that it could be a serious obstacle in Kennedy’s efforts to defeat the incumbent vice-president.

On the morning of November 9, 1960, I was in my junior year, seated with classmates in the first floor classroom located just to the right of the porch door by which we would enter and exit the building. Suddenly and unexpectedly, students and teacher heard the bells ringing, and for a longer period of time than the customary short alarm to indicate that class was at an end.

We looked to the clock on the wall and saw that the time shown did not correspond with the time for the end of class. We assumed it was momentary electrical malfunction and went back to the subject at hand. Soon thereafter the bell rang again for an extended period; and then again from time to time, throughout the rest of that class period. When the wall clock showed ten minutes before the hour, and with no bell ringing, our teacher told us that class was over. Some electrician would probably be called to come and find the glitch. But, in fact, no electrician was needed, and there was no glitch in the system. It was working perfectly.

On November 8, 1960, the preceding day, Americans went to the polls in great numbers to choose their next president. The race was so close, that when we left our homes for school the next morning the results of the election were still unknown. It was mid-morning on November 9, 1960, when Richard Nixon went before the press and conceded the election to Senator Kennedy.

From his office and residential suite on the second floor, Charlie was able to disengage the automatic electrical link of the bell system and take manual control of the situation. He soon commenced to share his own celebration of personal joy with the unknowing students and faculty of St. Sebastian’s by the intermittent and extended ringing of the bells throughout that morning. The question of whether a Catholic could be elected President of the United States had been answered. History had been made. An Irish-Catholic son of Massachusetts, who had taken the time to visit our school and be photographed with our Headmaster and our patron saint, was going to 1600 Pennsylvania Avenue! Thereafter, the bells always functioned in their usual fashion and at the proper times for their intended, practical purpose. But, for the unforgettable Charlie Flanigan, on one happy morning, they served as an instrument for a celebration of American and Catholic history, no less melodious and joyful than Tchaikovsky’s symphonic rendering of the bells of Moscow signaling Mother Russia’s triumph over Napoleon in 1812.