The Origin of JUG

As a deterrent to mischief-makers and those falling behind in their studies, JUG has been quite effective at keeping Arrows in line since St. Sebastian’s was founded in the 1940s. “Jugable” offenses included not completing homework assignments, disrupting classes, arriving late to school, or any other conceivable misbehavior. Many an Arrow can say that he has been saddled with JUG and may even recall how he spent that hour after school, but can they all identify JUG’s origin?

JUG comes from the Latin verb “jugum” – to yoke, couple, pair, join together. The Latin noun for a yoke is “iugum.” From the perspective of the priest faculty of the School’s early decades, essentially they were putting a “yoke” on young, rambunctious students. The term is commonly used in Jesuit schools. 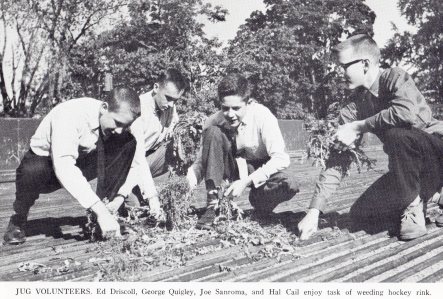 Specifically, what did completing an assigned JUG entail? Well, according to former faculty member Monsignor Contons, JUG was a stern, yet imaginative way to handle discipline. When asked, the retired priest recounts the time that Headmaster Flanigan had a bright student come to school on a Saturday for JUG. He told the boy to dig a hole a couple of feet deep next to the driveway. Once he was finished, Flanigan simply told him to fill it back up again!

“What you were obliged to do was to memorize poetry, and you couldn’t leave JUG until you had memorized that particular poem,” Peter McLaughlin ’55 recalled. “So it gave you great incentive during JUG to attend to duty.” Bob Zock ’50 remembers, “If you stepped out of line a little bit, you got JUG and had to stay after school. If you stepped out a little further, they handed you a mop and you mopped the locker rooms.” However, for some, these hour-long disciplinary sessions were not quite enough. Habitual offenders received a three-hour JUG on Saturday. “I remember having a Saturday JUG with Monsignor Flanigan because I skipped a regular JUG,” said Jack Doherty ’62. “He had me stand at attention guarding the St. Sebastian’s statue. It didn’t take long for me to realize that Monsignor had eyes on me from his living quarters when I heard him bellow out his window, ‘I said stand at attention!’ I didn’t move again until I was dismissed.”